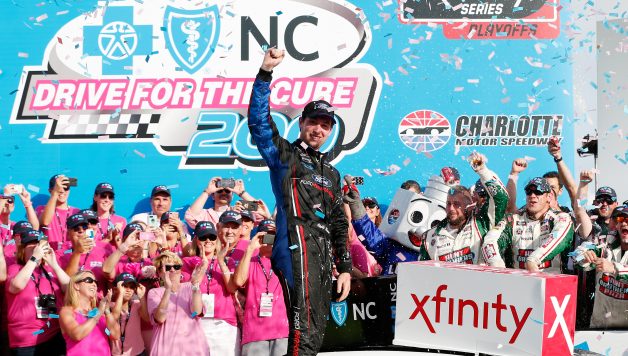 CONCORD, N.C. — Chase Briscoe is now a winner in the NASCAR Xfinity Series.

Briscoe held onto the lead for the final 24 laps in the Drive for the Cure 200 at the Charlotte Motor Speedway Roval, which made its NASCAR debut on Saturday. The 23-year-old driver secured the second win of 2018 for team owner Fred Biagi.

“I couldn’t believe it,” Briscoe said. “I was holding back tears the last couple of laps. This year has not been, by my standards, anywhere near where it needs to be.

“We’ve wrecked a lot of race cars, and I think my best finish was ninth, so I was really down on myself personally.”

It was Briscoe’s 14th start of the season, as the driver is splitting a limited schedule with Roush Fenway Racing and Biagi-DenBeste Racing.

Briscoe joins Ross Chastain (Las Vegas) and Spencer Gallagher (Talladega) as first-time winners on the circuit in 2018. Justin Marks, who announced earlier this week that Charlotte would mark his final NASCAR starts, finished runner-up in the No. 42 for Chip Ganassi Racing. It was his highest finish in the Xfinity Series since his lone victory in 2016 at Mid-Ohio.

Really looking forward to what will be my last ever weekend competing in @NASCAR. Double duty with @CGRnascar and @premiummotrspts in NXS and Cup. Lucky to have had all the opportunities I've had in 10+ years. Gonna have some fun and leave it all out there!!

Bell is the only driver guaranteed to advance to the Round of 8 with his win at Richmond Raceway last week.