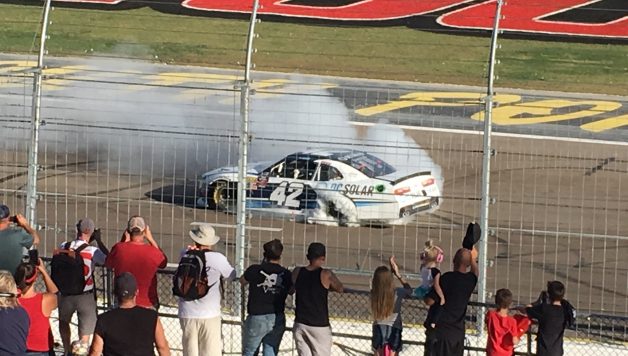 LAS VEGAS — In just his second start behind the wheel of the Chip Ganassi Racing No. 42 Chevrolet, Ross Chastain was able to claim his first career NASCAR Xfinity Series victory Saturday afternoon at the Las Vegas Motor Speedway in the DC Solar 300. After sweeping the opening two stages of the race, Chastain proved to be the car to beat on long runs, going on to lead 180 of the 200 laps completed.

It wasn’t without some challenge, however, as Chastain was forced to hold off multiple charges from regular-season champion Justin Allgaier during some late-race restarts.

“When I would get beat on restarts I could go right back by the guys after a couple laps because the car was that good,” explained Chastain. “Even when I didn’t do my job, I could roll the top in (turns) one and two and get a big run.”

With Saturday’s victory, Chastain was able to lock himself into the playoffs where he will join Allgaier, Christopher Bell, Elliott Sadler, Cole Custer, Tyler Reddick, Daniel Hemric, Brandon Jones, Matt Tifft, Austin Cindric and Ryan Reed as 12 drivers who will race to the championship when the series moves on to Richmond Raceway for the Go Bowling 250 on Sept. 21.

The victory is also monumental for Chastain as he admitted to the fact that he was not being paid for his three races with Ganassi this year and is “betting on himself” to prove his talent behind the wheel to open up potential opportunities.

Chastain will have one more opportunity to showcase his talents behind the wheel of the Ganassi-owned No. 42 next week in Richmond before handing the keys over to John Hunter Nemechek, who will complete the remainder of the season for CGR as Chastain returns to pilot the JD Motorsports No. 4 car.