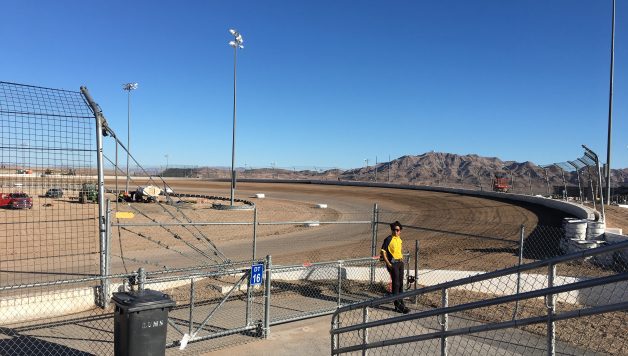 LAS VEGAS — The NASCAR K&N Pro Series West invaded The Dirt Track at Las Vegas Motor Speedway for the inaugural Star Nursery 100 on Thursday afternoon. With Thursday’s event being the first dirt race for the series in several decades, drivers had a lot more questions than answers as they headed into the night.

“I’m just excited that NASCAR decided to try and give dirt another shot with the K&N Series,” said former West series champion, Brendan Gaughan. “It’s a unique circumstance, everybody likes to talk about more races on dirt, but it’s not easy for a stock car to do it. (Las Vegas Motor Speedway) did a good job.”

Even for K&N West points leader, Derek Thorn, the motto of the night was to expect the unexpected.

“I just don’t know a lot about dirt. I haven’t seen a lot of dirt races in person, and I haven’t participated in any in a lot of years,” said Thorn. “Today we fired off, and the track was like driving on ice in Canada in a rental car, just slippery as heck. The first 50 laps will tell us a lot, then hopefully after the first 50 we can make some changes if the car isn’t quite right.”

Heat race winners Hailie Deegan, Derek Kraus, Thorn, and Cole Rouse would lead the field to the green flag, but the action would stop as soon as it started as a crash in Turn 1 would bring out the caution before the completion of lap one. On the restart, visibility issues would cause a significant multi-car incident on the front stretch as drivers struggled to see through the dusty conditions, displaying a red flag on lap eight.

Under the red flag, NASCAR officials brought the cars to the pits to allow the water truck to dump more water onto the racing surface and enable the teams to make repairs, including repairs for fan-favorite Christopher Bell.

Bell would find his way back to the front, only to be black flagged with five laps to go while leading for a restart violation. This would hand the lead over to current ARCA Racing Series points leader, Sheldon Creed. Creed went on to survive a green-white-checkered restart to win his first career NASCAR K&N Pro Series race.

“Super wild there, super dusty in the beginning,” said Creed in an interview with NASCAR Home Tracks, “We struggled there in the beginning, but the guys made good adjustments to the car, and it kind of really came alive that second half. I really wanted to go head-to-head with Christopher Bell at the end, but things didn’t work out that way, and I’m just pumped to pick up the win.”

The next time the K&N West series will be on track will be Sept. 29 at Meridian Speedway for the NAPA Auto Parts Idaho 208.