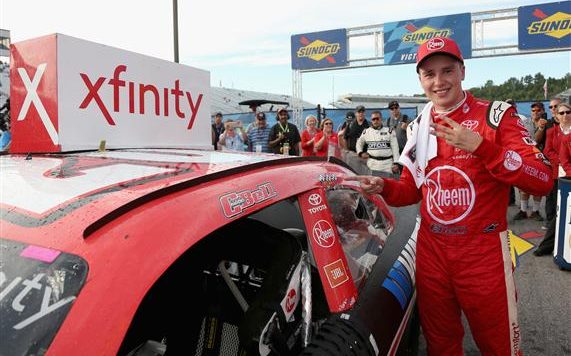 The Xfinity and K&N Pro Series East Series also ran on the mile oval. Brad Keselowski won the pole but had his work cut out for him as he started from the back of the field. For the K&N race, Derek Krause and points leader Tyler Ankrum started from the front row for the 70-lap event.

Chase Dowling, who’s 33 points behind Bonsignore, finished second and Ryan Newman third. For a majority of the race, a three-way battle for the lead was between Bonsignore, Newman, and Dowling as they separated themselves from the rest of the field. But a late caution allowed Santos, who started 14th, to get into contending position with less than 10 laps to go.

Ryan Preece, currently fifth in the NWMT standings, lost a left front tire with less than 30 to go and finished 28th.

Throughout the race, drivers avoided the second lane from the bottom, which wasn’t applied with the PJ1 traction compound. The first and third grooves were, and that’s where most of the racing happened.

Drivers were able to pull off divebombs and slide jobs through the turns. But Newman feels that the low-banked corners need the compound in every lane all the way up to the outside wall.

“You kind of transition through it at times,” Newman said. “You could cut across but couldn’t gain any time. … The cars carry so much corner speed that you kind of have to search for the grip, and the bottom lane was relatively tight. You had to get your left sides below the PJ1 to get the left rear out of it.

“I still think that if you’re going to use it, it needs to get all the way up towards the wall — allow us to use the whole racetrack. We only use half of the race track here, and that PJ1 would allow us to use more of it, in my opinion.”

After Keselowski was late to the driver’s meeting before the Lakes Region 200, his pole-winning car was forced to start from the rear. But it didn’t take long for him to climb into the top-five, as he was there at Lap 33.

Bell ultimately won the race and held off a charging Keselowski. The JGR rookie got four fresh tires while Keselowski got only right sides during the last round of stops, and scored his third win of the season.

Once again, racing on the traction compound was crucial. However, Bell said he’d like to see the second lane applied with it moved further up the racing surface.

Bell: “I think two strips is fine, but instead of putting it in Lane three, put it in Four to Four and a half. Nobody has ever run above that concrete strip and asphalt strip that you have, but if there’s PJ1 and grip up there, we’ll move up there. If you move the groove up, that’ll make the bottom more competitive and make the racing groove wider.”

Lastly, the K&N East series ran its 70-lap event with Tyler Ankrum leading every single one of them without a caution. Yes, you read that correctly — a caution-free K&N race.

After 300 laps between the two previous races, the PJ1 was worn off but was still important for the drivers to find it and use it to gain grip.

“You really had to be able to enter it on top and turn on down,” Ankrum said of the grip enhancer. “Halfway through the race, you could feel the VHT start to wash off … before practice and qualifying, it was faster.

What could be improved?

The modifieds were the first to race on the PJ1. But the quality of competition among those cars has been excellent at NHMS for years — even without the extra grip. Perhaps the K&N stock cars should race on the freshly applied substance first, then have the Xfinity race, and then let the mods run on the worn PJ1. It might make all three events entertaining. By far, the K&N was the least impressive.

It’s also a shame that NHMS finally has found a way to make the racing better after losing one of its Cup weekends. Had this traction compound been used in 2015 or 2016, maybe it could’ve saved the track from losing one of its places on the NASCAR national series schedule.

But better late than never. And at least the racing is finally better because this track has become notorious for hosting 150 mph parades. The NASCAR Cup race starts at 1 p.m. ET. It’s been moved up one hour due to the threat of wet weather.