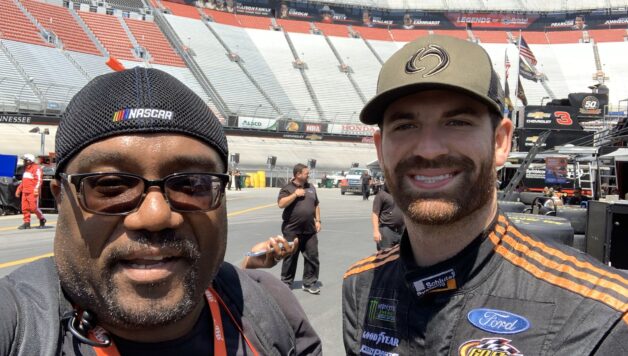 When Kevin Young was offered free tickets to a NASCAR Xfinity Series event by a coworker 10 years ago, he decided it was finally time to see a race in person.

Young, known by his Twitter name as ‘Kevin from Va’ or his handle @nascarfankly, has been a fan of auto racing for most of his life. His mother was a fan of Cale Yarborough and Richard Petty, and Young enjoyed “The Dukes of Hazzard” TV series as a kid. Yarborough famously made an appearance on the program, so it helped him grow familiarity with the stock car driver from the 1970s.

“I had always been a fan of the racing because my mom and I would always watch Cale Yarborough and stuff like that,” Young said. “I got kind of interested in Cale Yarborough because he was on ‘The Dukes of Hazard.’ You know, when you’re young, and you see cars jumping … I was pretty much always interested from then on. Every now and then, we’d watch the race on a Sunday.”

Young is a dump truck driver who lives about 45 minutes from Richmond Raceway. But he never went to races until 2010 because he had trepidation about whether black people were welcome at the track or not. He believed it was worth a shot when he received the free tickets, though, and had a tremendous experience. He hasn’t missed a race at Richmond ever since.

Young doesn’t quite have a favorite driver, but two names that he holds with particular appreciation are Austin Dillon and Elliott Sadler. Dillon was the first driver he ever met, and the Richard Childress Racing wheelman gave him some die-casts and autographs.

Sadler’s Virginia heritage resonates with Young. In 2018 — the final year of Sadler’s career as a full-time NASCAR driver — Young presented him a plaque as a token of appreciation.

“I got together with some of my group on Facebook and got a plaque for him because I really appreciated him being from Virginia,” Young said. “… I always liked Elliott Salder. He seemed like a hard worker and somebody that was raised kind of like me doing the best he can with his abilities and paying it forward.”

Young’s positivity is always apparent in his tweets. He often thanks media members and drivers for something they did or said and expresses fascination about many of NASCAR’s hottest topics, including the Kyle Larson incident from last weekend.

Some people have accused Young of being apart of a preposterous NASCAR promoting conspiracy. Unfriendly Twitter folks have said that Young is nothing more than a shill who gets paid by the sanctioning body to say positive things about the industry.

“I was bullied in school, and I know what it was like to be bullied. I got a pretty thick skin — whether it’s due to race, or my weight, or economics,” Young said. “So I just don’t feel the need to pile it on. … I just try to find the positive in everything.

“I try to live my life as much as I can. When I wake up in the morning, it’s a good day. There’s no use in dwelling on the negative when there are so many positive things around.”

Young says he’s made hundreds of friendships within the NASCAR fan community. Part of that, he says, is due to the tweetups that veteran reporters Jeff Gluck and Bob Pockrass host before each race.

“A lot of times, I might not remember everyone’s name because it’s so many people. … It’s just amazing sometimes when I go to the races, people recognize me by my voice or my Twitter picture,” Young said. “But there are a few (I constantly talk to), and I appreciate their candor. I have to explain it to my wife sometimes because she finds it strange that people find ole boring me fascinating, but I told her ever since I’ve been interacting on (SiriusXM NASCAR Radio), Twitter, and going to the races, people just want to meet me.”

Young hasn’t experienced much prejudice at the track, other than the occasional intoxicated fan that blurts out a racial slur. But that doesn’t deter him from attending races and meeting new people. He finds immense joy interacting with fans, drivers, and reporters, and firmly believes that NASCAR is meant for people from all walks of life.

Young is willing to give the recently disgraced Larson, who said the N-word during an iRacing event last Sunday, another opportunity. He notes that he’s not the first public figure to have an incident like this, and believes he can rebound from this low point in his career.

down , I will not turn this situation into finger pointing or he said ,she said ,we are responsible for what comes out of our mouth no matter the forum or place ,it is a matter of personal responsibility