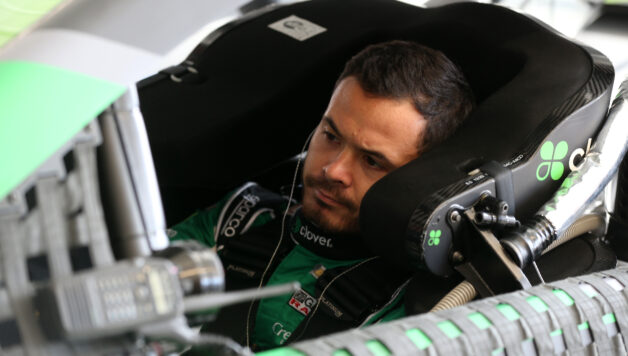 On Monday, NASCAR said it would investigate Kyle Larson’s racial profanity that was heard on a stream during the Monza Madness iRacing event Sunday night. Larson’s team Chip Ganassi Racing has suspended the driver without pay.

Larson appeared to think he was unsuccessfully communicating with someone during the race, which featured several NASCAR and IndyCar drivers. The following is heard in this clip of the stream:

NASCAR stated: “NASCAR is aware of insensitive language used by a driver during an iRacing event on Sunday, and is currently gathering more information.”

CGR stated: “We are extremely disappointed by what Kyle said last night during an iRacing Event. The words that he chose to use are offensive and unacceptable. As of this moment, we are suspending Kyle without pay while we work through this situation with all appropriate parties.”

Larson, who is of Japanese descent and was a member of NASCAR’s Drive for Diversity program in 2012, has not made a statement at the time of publication.

UPDATE: NASCAR says Larson is suspended indefinitely and must attend sensitivity training as directed by the sanctioning body.

“NASCAR has made diversity and inclusion a priority and will not tolerate the type of language used by Kyle Larson during Sunday’s iRacing event,” NASCAR said. “Our Member Conduct Guidelines are clear in this regard, and we will enforce these guidelines to maintain an inclusive environment for our entire industry and fan base.”

UPDATE 3: iRacing has indefinitely suspended Larson from participating on its service:

This story will be updated as more information about the incident comes out.