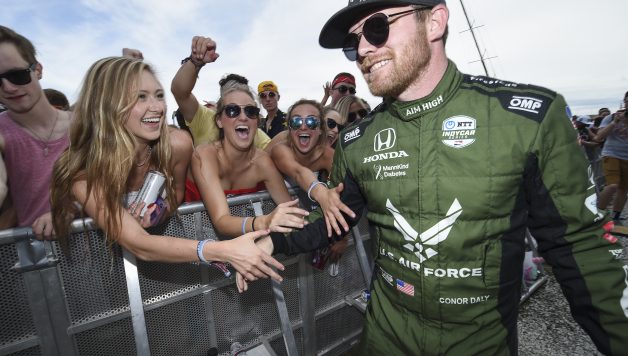 INDIANAPOLIS — Conor Daly had one chance to prove himself in a top ride this year, and it came with IndyCar powerhouse Andretti Autosport during Sunday’s Indianapolis 500.

Daly, driving the No. 25 Honda, finished 10th in his one opportunity with the team. It was the best finish among drivers who were scheduled to run a one-off at the Brickyard this season.

He qualified 11th and ran in the top-10 most of the day. It was a solid performance, but he was looking for more.

When asked if he felt like he made the most of his opportunity after the race, he gave a stern “no.”

“But I don’t think it was our fault,” Daly said. “We didn’t put a foot wrong. We had good pit stops. The car was good, but it would have been good to finish in the top-five.”

When IndyCar red-flagged the race with 20 laps to go, it took several laps for race control to sort out the running order. Daly was lined up behind Takuma Sato, which he believed was incorrect.

“I didn’t leave anything out there. IndyCar left it out there for us,” he explained. “I don’t know why they put us behind Sato. … The track position was so important. That could really ruin the race, and it essentially did for us. I never saw Sato the whole race. He was never there, so I don’t know where that came from.”

IndyCar stood by its decision.

Performance-wise, he was satisfied. He hasn’t competed in any other IndyCar races but still contended with the leaders throughout the day. In an Andretti-powered vehicle, it was expected that he would do that.

“This is all I get to do. I haven’t raced anything all year; I haven’t been in the car,” he said. “And we’re out there fighting with guys that are really good. … If we had finished in the top-five that would have been very (nice).

“It helps when you’re with a big team, and it was a big opportunity for me. … It was nice to be in the fight for most of the race.”

Daly doesn’t know what his next move is. He’s bounced around the IndyCar paddock the last few seasons, making stops at Harding Racing and Dale Coyne Racing.

Daly was backed by the U.S. Air Force for the 500. The military organization boosted its funding for Daly’s Indy effort this year, which allowed him to land the seat with Andretti. In 2018, he raced for Coyne, which works on a smaller budget. He’s been trying to secure sponsorship that would allow him to run a full season again.

“I think we can be proud of what we did,” he said. “We will see what happens after this.”