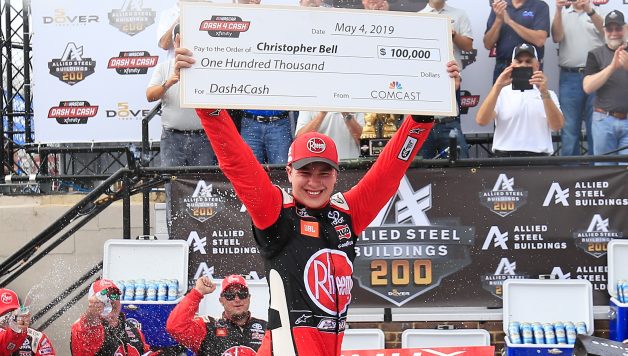 Cole Custer started from the pole and led the first 75 percent of the Allied Steel Buildings 200, but finished fourth. During a round of pit stops under caution in the final stage, Bell’s crew got the No. 20 Toyota out before Custer’s No. 00.

It was the only pass for the lead in the race.

Gray Gaulding, the 21-year-old underdog, going for the $100,000 finished 20th after being involved in a late caution.

Gaulding was eligible for it after finishing second at Talladega last week. Then he almost wasn’t able to race at Dover after his sponsor bailed earlier in the week.

The next Xfinity race will be at Charlotte Motor Speedway in three weeks. The series won’t accompany the Cup Series at Kansas Speedway next weekend, and then the Cup All-Star race will take place in Charlotte the following weekend.