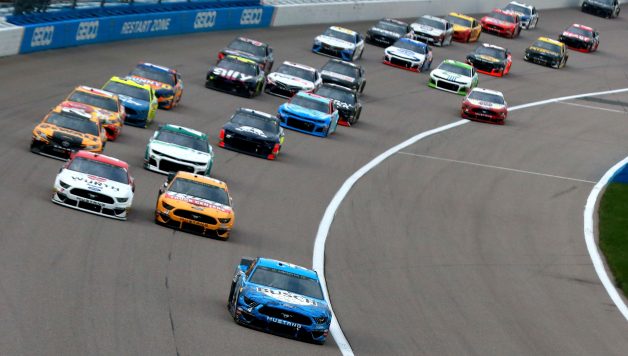 The cool temperatures and the nighttime start of the Digital Ally 400 at Kansas Speedway helped make Saturday evening’s NASCAR Cup Series race one of the best of 2019.

The reduced horsepower and high drag rules package NASCAR implemented for over half of this season’s Cup scheduled had underwhelmed at the intermediate tracks early in the year.

At Atlanta and Las Vegas, the racing didn’t look much different than what has transpired there for the last few years. However, cars weren’t fitted with aero ducts at Atlanta, and the warm weather in Las Vegas were easy scapegoats as to why the racing wasn’t closer and more compelling.

Things didn’t get any less worrisome at the next two speedways the series visited. Auto Club Speedway failed to deliver. The racing surface at the Southern California track is old and rough, and that was deemed the reason for a lackluster race.

The racing was better than the other previous intermediate venues, but it still wasn’t quite what NASCAR was looking for. There were glimpses of side-by-side racing and utilization of the draft, but the leaders were still able to break away from the pack by a few seconds.

On Saturday night, NASCAR’s top drivers raced on a crisp night at Kansas. The track was repaved seven years ago, but the surface still has enough grip in it to make it one of the fastest places on the circuit.

High speeds, cold air, and nighttime racing would have to be the perfect combination for a quality show in the Midwest. It had to be, for NASCAR’s sake.

The first two stages weren’t flashy, but they were decent enough to keep the audience entertained. Kevin Harvick and Chase Elliott were the guys to beat in the first half. But Harvick’s engine started overheating, forcing him to pit, and Elliott later had a bad pit stop under caution.

The lead was handed to Alex Bowman, who has finished second in the last two races. Bowman and Hendrick Motorsports have experienced a renaissance the last few weeks as their cars have gotten quicker, and Bowman grew hungrier as he searched for his elusive first Cup win in Dale Earnhardt Jr.’s former ride.

Bowman held off a hard-charging Kyle Busch in the second half of the final stage but couldn’t seal the deal as he wore off his tires from aggressive maneuvers to block Brad Keselowski.

The last couple of laps were a critical part of the race for drivers who were looking for the win, but it was just as vital for NASCAR, which needed to see the aero package come to life.

Luckily it did. The racing in the final 50-plus laps was close and intense. Cars could sit in the draft of the vehicle ahead and get up to the bumper along the straightaways. Then they’d be door-to-door in the corners. No one could break away, and it was beautiful.

“That was scrappy,” said third-place finisher Erik Jones. “With this package, you just have to be really scrappy and really fight for every spot.”

Added Elliott: “I think this track suited with what they were after, as far as being able to draft and be close to each other. This is kind of the perfect form for it, I don’t really think it’s realistic everywhere. It was exciting tonight, so that was a win for them.”

Keselowski won the race, and Bowman ended up second for the third consecutive time. It was a heartbreaker for the No. 88 driver but an emotional victory for Keselowski, who dedicated it to his former Truck Series team owner Mike Mittler, who died on Friday.

But it was really NASCAR that won. If Kansas were another monotonous high-speed parade, the sanctioning body would likely be at a crossroads over what to do next with the rules.

Fortunately, that didn’t happen. Although there will be times later in the season where the racing will look dull again, at least NASCAR knows what the recipe is for a great intermediate race with this package.