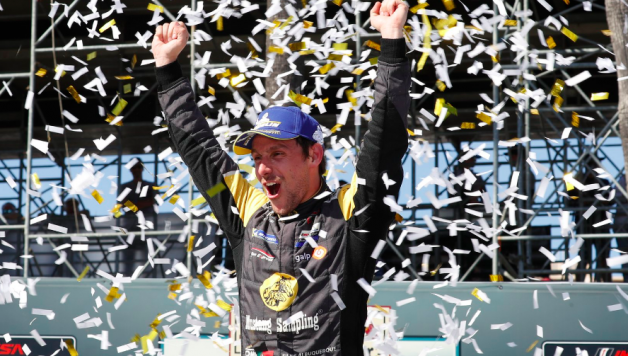 Albuquerque gave his No. 5 Cadillac team its first win of the season and first since last year’s Long Beach race. For the final 20 minutes of the 100-minute sprint, he held off a hard-charging Taylor to clinch the overall victory.

Penske’s sister car driven by Juan Pablo Montoya and Dane Cameron rounded out the podium for the DPi class.

Jan Magnussen and Dirk Mueller had a tremendous battle for second in the closing laps that ended with Mueller crashing.

Magnussen hit the rear of the Chip Ganassi Racing Ford GT, and Mueller spun into the wall on the final lap. Magnussen limped to the finish line with a damaged left front fender to claim second, and his Corvette teammate Tommy Milner finished third. Mueller wound up fourth.

The next WeatherTech SportsCar Championship event will be at the Mid-Ohio Sports Car Course next month. It will be a two hour and 40-minute race.