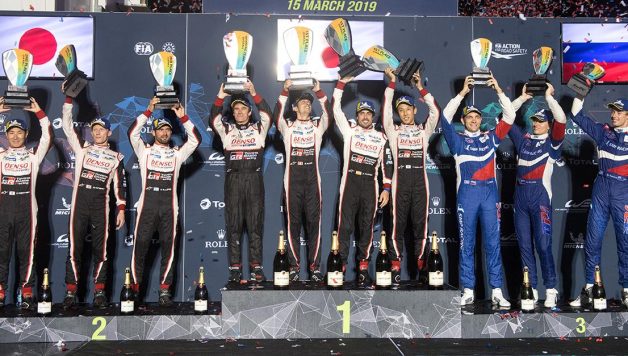 The No. 8 led every lap after starting from the pole and setting a track record in qualifying for the 1000 Miles of Sebring, but a victory wasn’t certain until about halfway when Jose Maria Lopez, driving the other Toyota entry, made contact with Jonny Adam in the TF Sport Aston Martin No. 90.

Lopez was only a few seconds behind Buemi at the time of the incident. However, the No. 7 Toyota sat in the pits for nearly two laps as the team made repairs to the floor.

Alonso, Nakajima, and Buemi lead the championship with two races remaining in the series first ever “super season.” The 2018-19 campaign began with the 6 Hours of Spa-Francorchamps last year, and it will end with Le Mans in June. Those are also the final events remaining in the current championship.

Alonso is 2-for-2 racing in the U.S. in 2019. The Spaniard won the Rolex 24 at Daytona in January driving for Wayne Taylor Racing in the IMSA WeatherTech SportsCar Championship. Now that he’s checked the WEC’s trip to Sebring off his list, the next challenge in America he’ll face is the 103rd Indianapolis 500.

If he wins the Indy 500, he’ll become the second person in history to complete the Triple Crown of Motorsport. Only Graham Hill has won Indy, Le Mans, and the Monaco Grand Prix.

The 6 Hours of Spa will run on May 4. Alonso, Buemi, and Nakajima are the defending winners of the event.