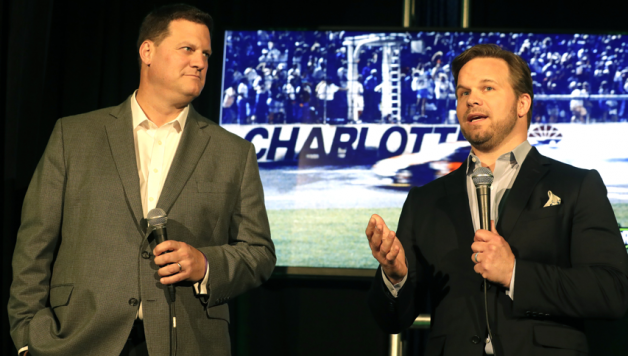 Aragon: Betting on the Roval paid off for SMI, NASCAR

CONCORD, N.C. — Anyone who knows me knows that I believe gambling here and there can be entertaining. That’s what Speedway Motorsports, Inc. and company president Marcus Smith did with the Charlotte Motor Speedway road course.

Jimmie Johnson took a gamble on the final lap and locked up his brakes, spun and took out leader Martin Truex Jr. in the process.

Ryan Blaney, a bystander with a front-row seat to the melee, powered through and claimed his first win of 2018 in an instant classic NASCAR finish.

Yet, the finish to the Bank of America ROVAL 400 Sunday was only a minor detail in a large moving picture that got us to that point.

The consensus this weekend at the track was all around the hype of both the Xfinity and Cup Series.

Because of the wildcard this weekend presented and the limited testing for every series during the year, it felt like Charlotte’s road course races were more hyped than the Daytona 500.

Arguably, this has to have been the most uncertain race of the entire 2018 playoffs.

The gamble to convert the 1.5-mile track for the fall race has paid off.

Smith envisioned the idea, and when it became a reality, it seemed like a no-brainer. Consistency is a great thing, but the playoff schedule was becoming too predictable with the venues and cutoffs.

In front of nearly packed grandstands, I felt the race had shades similar to the Tony Stewart victory at Sonoma in 2016, where Stewart moved Denny Hamlin on the final lap through the hairpin turn to take the victory in his final NASCAR win.

But as the night wore on, and hearing the discussion and chatter through podcasts and social media, the race had a 1979 Daytona 500 feel to it.

Drivers I spoke with throughout the weekend, who include Truex, Chase Elliott, and Ross Chastain, seem to lean toward the fact that the backstretch chicane was the hardest part of the track.

Like most race weekends, NASCAR and its communications team sets up media pace car rides with one of the Cup Series drivers to provide reporters insight on the track in a production car that is similar to the pace car for the races.

This past weekend, Jeffrey Earnhardt took the street Toyota Camry to the course, and during his one-lap circuit, I learned a lot from his perspective.

I learned a lot about the race track; where braking zones were, where drivers could utilize passing zones and seeing and feeling the elevation changes. Jeffrey said it best, and I am paraphrasing, but it’s amazing how much elevation is within the infield of Charlotte Motor Speedway.

For me, seeing all the cars hit the race on Sunday, reminded me of a go-kart track. Drivers seemed to be learning more about the track racing in a pack.

The risk exceeded the reward.

No doubt it took planning, logistics, and many moving parts to make this idea a reality, but we have a great race to look forward to next year and in the seasons to come.

No matter what happens at the next Roval race, the inaugural weekend encapsulated great stories and added to the classic NASCAR lore.

I had heard over the years from fans wanting a road course in the playoffs. They have it, the racing was great, and they have a new venue to take pride in.

Regardless of the last lap drama Sunday, both events saw fuel and tire strategies along with great passing opportunities and action throughout every stage of the races.

SMI and Smith made the call, and I am honored to have had a front row seat to all the action.