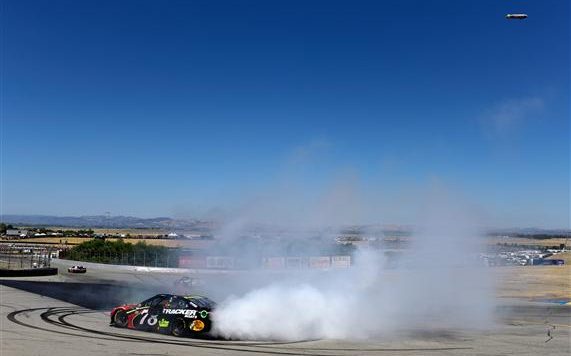 Lack of excitement in 2018 NASCAR season emphasized by Sonoma snoozer

The Toyota/Save Mart 350 at Sonoma Raceway is usually one of the most exciting events on the NASCAR Cup Series schedule.

The intricate shape and elevation changes make Sonoma a challenging course, and it always showcases the talent of the drivers. However, driver talent isn’t what the fans in Northern California saw on Sunday.

Instead, it was the “Big 4” dominating, just like they have at all the other races (other than Daytona and Talladega) this year.

Martin Truex Jr. won at the 1.99-mile road course for the second time of his career and for the third time this season. Stewart-Haas Racing’s Kevin Harvick and Clint Bowyer finished second and third, respectively, while the final member of the quick quartet, Kyle Busch, finished fifth.

Chase Elliott shook things up by finishing fourth, and A.J. Allmendinger won Stage 1. Other than that, this race was the most boring I’ve ever watched at Sonoma.

Allmendinger always qualifies well yet fails to live up to the hype at the road course more times than not. He’s the classic definition of a “ringer,” which are all but extinct in the Cup Series, and his best chance of winning before the playoffs is now just the one race at Watkins Glen in August. Shortly after he won the stage, he missed a shift, and with that, a potentially intriguing storyline was shot down in flames … at least for the next six weeks.

“There are three cars that are the class of the field all day long,” Bowyer said after the race. That statement should be said about the entire year.

The most dramatic moment of the race was a deke by Truex’s crew chief Cole Pearn to trick Harvick onto pit road during the final round of stops. Pearn told Truex to pit, and the crew looked ready to hop over the wall waiting for the No. 78 to stop, but he didn’t come in. The strategic call worked, and the race stayed green from that moment on as Truex won with a 10.513-second margin of victory.

Truex, Bowyer, Harvick, and Busch have won all but two races this year. It’s getting old. Time for someone else to step up and beat the “Big 4.” Kyle Larson or Elliott in victory lane would be a welcoming sight to fans. Their youth would be appealing to the younger audience.

Maybe one of the Team Penske drivers — Brad Keselowski, Joey Logano or Ryan Blaney — could create some much-needed drama. Those guys are expected to contend with their Ford counterparts at SHR. Logano has one victory at ‘Dega, but he and his teammates haven’t quite been able to keep up the SHR and Toyota Racing Development machines.

Every week, 36-plus cars show up, but it feels like a four-car race, no matter the venue. There’s more speculation about who’ll be in the Championship 4 at Homestead right now instead of the 16 drivers that make the playoffs. To me, that says, “The playoffs won’t even matter because the ‘Big 4’ are too good.”

I’m afraid the postseason will be like the NBA playoffs. The last four years, it’s been the Cleveland Cavaliers against the Golden State Warriors, so guess what; the ratings for this year’s NBA Finals were down from last year. Hmm, I wonder why. Could it be that the fans are getting bored of the same old story?

That’s what’s happening in NASCAR. When the green flag waved today, I felt enthusiastic because I thought there’d be an exciting race. When the checkered flag waved, I was wondering if I’ll even want to watch next weekend’s race at Chicagoland Speedway.

If I sound like a Debbie Downer right now, that’s because I am one, which is concerning because I love this sport. But there are still 20 races left this year. Let’s hope there’s something better in store as the series strides into the summer stretch.