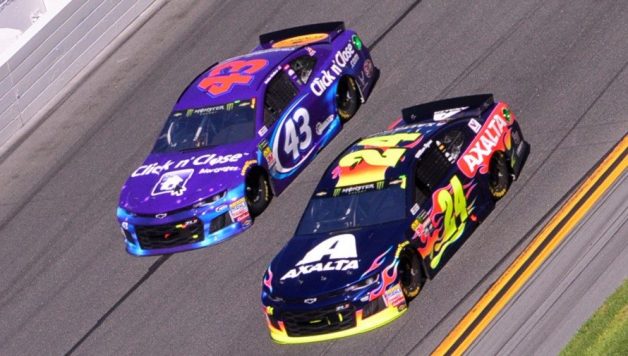 Aragon: We will see a rookie in the NASCAR Cup playoffs

The Monster Energy NASCAR Cup Series’ rookie class is strong this year and continues to impress.

Expect to see at least one of the drivers qualify for the playoffs — the first time a rookie will make the postseason since 2016.

Daytona is one animal, and it is not indicative of how teams will run throughout the season. Both drivers started the year on opposite ends of the spectrum with their runs in The Great American Race, but both have been running consistently better each week.

Right now, Byron (18th) and Wallace (19th) are 11 and 20 points respectively behind the playoff cutline.

Byron has led in three of the last four races and placed inside the top 10 for the first time in his Cup career with his run at Texas. It will be the first of many this year.

I talked with Byron post-race, and he was ecstatic to pick up his first top 10. Afterall, he was the highest finishing Hendrick Motorsports, driver.

Meanwhile, Wallace finished inside the top 10 for the first time since the Daytona 500, and he was excited about his result. It was the first time in four races he beat Byron straight up.

As the season progresses, we are going to see both drivers get better because of several factors.

First and foremost, the Chevrolet camp as a whole will continue to improve as the new Camaro ZL1 gets more track time.

Jimmie Johnson said in Fontana that the team would be improving as the season goes, and I think that will apply to his teammate Byron.

Second, both drivers have run well at the 1.5-mile tracks, venues that make up a chunk of the regular season. Both drivers will start placing in the top 10 during stages more often and will earn those coveted stage points.

Lastly, it is possible a luck win could be in the works. There are still two restrictor plate venues on the circuit left; Talladega in May and Daytona in July. Those tracks are the great equalizer for everyone, and a win is much more likely.

As playoff positions become more scarce on just points, fuel mileage stretches, and even weather can play a role in strategy that could produce a surprise first-time winner.

When the playoff grid sets in Indianapolis, one of these drivers will point their way into the post-season, and we will be talking about which rookie will be competing for a championship in 2018.

Who will win first?

At the beginning of the season, I said William Byron would make the playoffs, and I still feel that will be the case.

Byron’s efforts also come from a four-car stable, compared to the single-car operation Wallace has with Richard Petty Motorsports.

If we are talking straight up speed, it will be Byron celebrating a victory before Wallace, and likely this year.