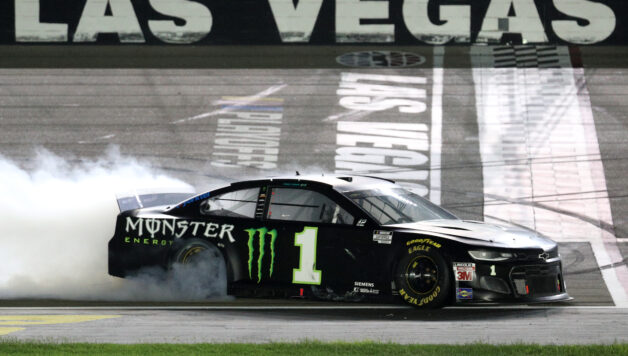 With a career record of 0-for-21 coming into Sunday night’s South Point 400 at his hometown Las Vegas Motor Speedway, Kurt Busch may have felt like a “long shot.” But with fortunate track position late in the race and some sure-bet restarts at the front of the field, Busch can now count himself a Vegas winner.

The victory was a high stakes haul, automatically earning a position for Busch in the next round of the NASCAR Cup Series Playoffs – moving the 2004 series champion from last place among the 12 Playoff drivers entering the race to the first driver with a guaranteed spot in the Round of 8.

With only one top-10 finish in the last six races at the 1.5-mile Vegas track and so much on the line, Busch was understandably emotional as he climbed onto the hood of his No. 1 Chip Ganassi Racing Chevrolet to celebrate the big win after the checkered flag.

“This is what kids dream of when they grow up racing, you dream of winning at your home town track,” Busch said. “For two decades it’s kicked my butt and tonight with this Monster Energy Chevy, I’m in awe.”

“I knew the race would come to us. We needed to get to night-fall and one of those quirky [crew chief] Matt McCall pit sequences finally unfolded and we got lucky. You have to be lucky and you have to be lucky in any race, but we did it tonight with teamwork, pulling through and not giving up.”

A caution flag flew on Lap 189 – just after the race’s leaders had pitted but before Busch and nine other cars had. That changed the complexity of the race and forced the more dominant cars such as Hamlin’s No. 11 Joe Gibbs Racing Toyota and Hendrick Motorsports teammates Bowman and Chase Elliott to play catch-up in the closing laps. Those three drivers combined to lead 199 of the 268 laps. Busch led 29 in total, but most importantly the last 26 laps.

Hamlin’s 121 laps out front marked the fourth time this season he’s led at least 100 laps and the second time he did not win after doing so.

“Just same thing as happened at Darlington, untimely cautions,” Hamlin said of the night. “That’s what’s keeping us out of victory lane. We obviously had a dominant car today and I’m proud of the whole FedEx team for giving me such a great car, by far the best car I’ve had in Las Vegas and maybe a long time at any mile-and-a-half [track]. Just really happy with it.”

“Really encouraged by the way we ran, obviously just very disappointed we didn’t get a win.”

Two races remain in this second round of the Playoffs, next weekend at Talladega Superspeedway and Oct. 11 at the Charlotte Roval road course. Eight drivers will advance to the penultimate three-races following Charlotte that will decide which four drivers contend for the NASCAR Cup Series championship trophy at Phoenix on Nov. 8.

With his win Sunday Busch has the automatic ticket into the next round. Harvick leads the Playoff standings with a three-point edge on Hamlin. Brad Keselowski, Truex, Joey Logano, Elliott and Bowman round out the Top-8 after Las Vegas.

Kyle Busch heads to Talladega nine points behind Bowman for that final eighth transfer position. Clint Bowyer is 20 points back, Aric Almirola is 27 points back and Austin Dillon is 32 points from the cutoff line.