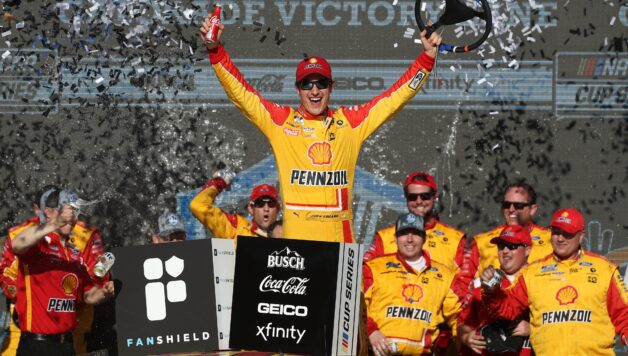 Sunday’s FanShield 500 at Phoenix Raceway — the place that will hold the season finale in eight months — was an entertaining race. The NASCAR Cup Series cars had a modified version of the aero package, which featured a shorter spoiler, PJ1 traction compound on the track’s higher grooves, and a softer tire from Goodyear.

These three ingredients resulted in one of Phoenix’s most compelling races in years. The cars were difficult to handle, tire falloff led to more passing, and additional grip in the higher part of the turns led to plenty more door-to-door action.

Phoenix, being a flat, one-mile oval, has been known to produce single-file racing. Last year’s on-track product with high downforce and 750 horsepower made it challenging to pass, and therefore, created dull events.

There was uncertainty going into this weekend because NASCAR’s modified package was being put to the test for the first time. Would passing be easier? Can the drivers use more than one lane?

NASCAR no longer has to worry as much about what the racing will be like when the series decides its champion. Phoenix will host its first-ever title race in November, and the event must be entertaining. Fans like action, drama, and three-wide racing, and they were accustomed to that at Homestead-Miami Speedway, which has been the championship venue for the last two decades. Sunday’s race delivered all three.

“Hats off to NASCAR for collaborating with the teams, the track, and ultimately putting on a way better race than what we saw here last year, which is a combination of a lot of things that made it a lot better,” Logano said at the start of his winner’s press conference. “Obviously, the smaller spoilers allowed us to race, a softer tire, had more falloff, and then with the ‘awesome sauce’ (traction compound) up top, it really put an extra wrench into the race to where we showed up here saying I don’t really know what we’re going to do.”

The traction compound might have been the biggest unknown from Sunday. There, of course, was a chance that it might be effective at the beginning of the race but then wore out as it got later into the event. That’s something the sport has seen at New Hampshire Motor Speedway — another flat, mile-long oval — in recent years. The compound’s usability would decrease noticeably in the second half of the races at NHMS. It held up at Phoenix, though.

“Even before the race, I was like, ‘Well, I don’t know how this top is going to work out, if it’s going to wear out, what is going to happen on the long runs, short runs, restarts,'” the Team Penske veteran said. “There were so many unknowns.”

Third-place finisher Kyle Busch gave the package a positive review. Busch was perhaps the most outspoken driver against the high-downforce kit in 2019. It got to a point last year where he refused to be asked about the “P-Word” after a win at Pocono Raceway.

“We had this race to try some things and see if it would work; we hoped it’d work … I expect us to stay with this one,” he said. “A lot of racing to go, but it certainly is a good platform to start off our short-track package and what we wanted to see as we head off to Martinsville and Richmond to see what we can do there.”

“I think everyone in this whole facility took a sigh of relief today,” Logano said. “The competitors, I think NASCAR, I think the fans, the media, everyone that puts so much into this sport, it’s our life, right, so much that we do for it.

“It’s cool to see that we’re able to make changes and make a difference and really put on what I thought was obviously a great race. We won. Even if we didn’t win, I would have said that was a pretty cool race.”