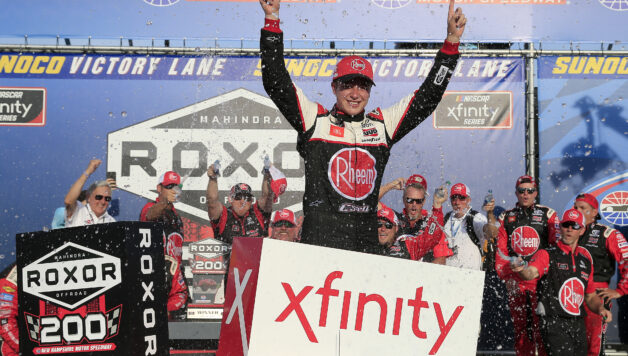 The IndyCar Series also ran at Iowa Speedway on Saturday after a rain delay pushed it from being an early evening event to a late-night dash.

Christopher Bell continued his domination in the NASCAR Xfinity Series with another victory at NHMS. He led 186 of 200 laps with a four-second margin of victory over Cole Custer.

Truck Series rookie Harrison Burton and Cup veteran Paul Menard exchanged words on pit road after the race. The two made contact during it, and Burton ended up finishing 29th after Menard wrecked him.

Video: Harrison Burton goes to talk with Paul Menard on pit road after the race. pic.twitter.com/PzeNMVkaPF

Burton felt that Menard’s maneuver which landed him the Turn 2 wall was unwarranted. Menard defended his move, saying: “He ran into me a couple of times. … He’s a young kid. He’s got a long time in this sport. He’s got to figure that stuff out pretty early. As he races more in Xfinity, and especially if he gets to the Cup level, they don’t put up with that stuff. I felt it was my place to tell him that’s not cool.”

Tommy Joe Martins announced his departure from B.J. McLeod Racing before the race. He’ll be joining Carl Long’s MBM Motorsports team and running the No. 66 car on a part-time basis beginning at Watkins Glen next month.

Long also owns the No. 66 Cup car and Martins hopes to make his debut in NASCAR’s top series in the near future.

“I am 32. I am not getting any younger,” he said. “I would like to move up to the Cup Series at some point. We have talked about that, too. There are opportunities on the table.”

Chase Cabre won the 70-lap NASCAR K&N Pro Series East race at NHMS from the pole. It was his second win of the season and his career.

There is a tight battle for the championship lead in the fourth-tier series. Derek Kraus holds the top place by a mere two points over Sam Mayer. Cabre, currently third, is six behind Kraus and Tanner Gray is fourth just 15 behind Kraus.

The next K&N race will be a joint event at Iowa Speedway. Both divisions will be there for a 150-lapper.

NASCAR’s Whelen Modified Tour raced twice at NHMS this weekend. The mods ran their annual 30-minute All-Star Shootout on Friday, and as usual, it was one of the best races you’ll see at a NASCAR track all year.

Patrick Emerling made a last-lap pass on Bobby Santos III to win his sixth career All-Star event. It was a three-wide photo finish with Justin Bonsignore diving to the inside at the last moment.

Ron Silk won Saturday’s race, which counted towards the championship. It ended under caution though, because NASCAR had to prepare for the Xfinity event. There was damage in the Turn 1 wall, which forced a red flag. Officials couldn’t resume the 100-miler quick enough to have time for a green-white-checkered finish.

One of IMSA’s two GT-only races of the season ran on Saturday. The GTLM and GTD classes competed at Lime Rock for the Northeast Grand Prix.

Ryan Briscoe and Richard Westbrook of Ford Chip Ganassi Racing won the overall race after the No. 912 Porsche of Earl Bamber and Laurens Vanthoor started from the pole and dominated.

A late pass allowed the Fords to earn their first class win of the season. The No. 912 Porsche finished second and the No. 67 Ganassi Ford of Joey Hand and Dirk Mueller rounded out the podium.

Pfaff Motorsports won the GTD class in a photo finish over the No. 86 Meyer Shank Racing w/ Curb-Agajanian Acura, which started from the pole. It was the first win of 2019 for the No. 9 Porsche team and drivers Zacharie Robichon and Dennis Olsen.

Josef Newgarden won the Iowa 300 and extended his championship lead to 29 points over Alexander Rossi on Saturday night.

It was a late-night show for the series as the rain didn’t allow the engines to be fired until 11:46 p.m. ET — more than four hours after the scheduled time. Then a red flag came out on Lap 56 because it started to precipitate again.

When the checkered flag waved, it was 2:14 a.m. ET. Kudos to you if you stayed up for the finish and watched Newgarden lead 245 of 300 laps.

IndyCar’s next race will be the Honda Indy 200 at Mid-Ohio in one week. Five remain in the season as Newgarden looks to win his second title in his third year with Team Penske.

Green flag for the Foxwoods Resort Casino 301 waves at approximately 3:15 p.m. on Sunday. Brad Keselowski starts from the pole, and Kyle Busch will be on his outside.