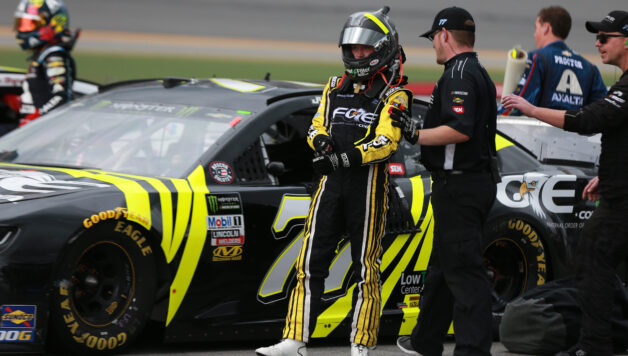 Imagine if Scott Boras, the high-profile sports agent who represents hundreds of Major League Baseball players, decided to branch out and begin his own MLB franchise while maintaining his role as an agent for players around the league.

It’s hard to imagine. There’d obviously be a conflict of interest. How could Boras do what’s best for his team while also working with players who will take the field from the opposing dugout? It doesn’t make sense.

But the organization has gone racing this year after buying the charter from the now-defunct Furniture Row Racing. Spire fields the No. 77 car, which has proven to be one of the slowest vehicles on the track every week. The team isn’t out there trying to build fast cars and win, though. It’s there to make money, just like any other type of business. And it’s not like it has to worry about missing the field in qualifying because the charter secures the No. 77 a position in all 36 events.

So when the race at Daytona International Speedway was declared official on Sunday afternoon with Justin Haley and the No. 77 car in the lead, it created one of the most controversial winners NASCAR has ever had.

First, let’s break down how Haley got to the lead.

With a little more than 40 laps left in the 160-lap event, Austin Dillon and Clint Bowyer initiated an 18-car pileup in Turn 1 of the famous Daytona oval. Just about every vehicle in the lead pack wrecked. The ones that survived the crash pitted, and Kurt Busch inherited the lead under caution. Landon Cassill was second, and Haley was third.

Then Busch and Cassill pitted because they thought they could make it to the finish by making one more stop for fuel and maybe a few minor repairs under the yellow. Haley takes the top position.

NASCAR sees that lightning has come too close to the track, so it decides to bring cars onto pit road and wait for the weather to pass hopefully. Instead, the rain arrived in full force, and it forces NASCAR to call the race. Haley, who was in 27th before the big crash and didn’t make a single green-flag pass to get to the lead, wins. That’s some luck.

The finish is as ugly as can be, but what makes it even worse is that a race team more interested in its ledger than its horsepower is put in the spotlight.

One can’t blame Spire for being financially responsible. Many of the top teams in NASCAR aren’t as they exceed their budgets so they can beat their competition on the track. But those are the teams that most fans actually root for and want to see up front.

Spire has been keeping its costs down all year by not investing in making the cars quicker and finding drivers who bring sponsorship. However, the difference between Sunday and the first 17 races of the year is that fans weren’t paying any attention to the No. 77 car in those first 17 races.

If Busch or even Landon Cassill of StarCom Racing had chosen not to pit and one of them won, there wouldn’t be so much disarray among the fans’ emotions from the race. Those two drivers are full-timers who’ve been in the Cup Series for a while and at least have some celebrity attached to their name.

Haley doesn’t. He’s still competing in the Xfinity Series as a rookie and hasn’t won a race in that division yet. It also doesn’t help that he’s with a Cup team basically designed to finish last every week. It just makes the sport look bad.

Haley won’t be eligible for the Cup playoffs as he earns points in the Xfinity Series. Spire could theoretically make the playoffs for the owner’s title, though. However, the No. 77 would have to crack the top-30 in the standings for eligibility. As of Daytona, it is ranked 34th and 86 points away from 30th with eight races left in the regular season. It’s pretty unlikely it can accomplish the feat.

Overall, it’s a weekend that NASCAR will want to forget. But Justin Haley is nonetheless a winner in the Cup Series. He still gets to bring home the trophy and celebrate with his team and family. It’s really the only feel-good aspect from the race. While Kentucky weekend can’t arrive fast enough for the sanctioning body to move on with the season, 20-year-old Haley will get to live the rest of his life as a winner in stock car racing’s elite level.