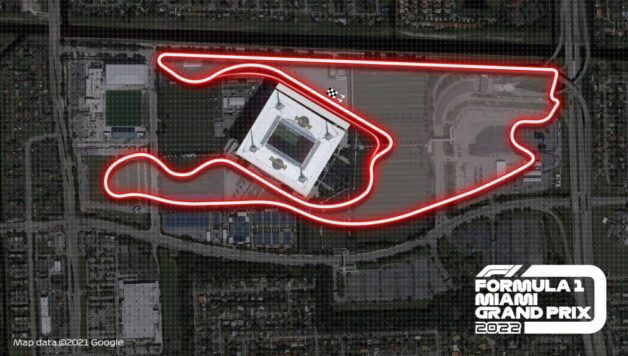 Editor’s note: This story will be published in the New Mexico Motorsports Report magazine.

It was four years in the making, and it overcame multiple obstacles throughout the planning process, but at last, the highly anticipated Miami Grand Prix will be held on the streets of South Beach from May 6-8.

The temporary circuit, named the Miami International Autodrome, is built around the Hard Rock Stadium, which is home to the Miami Dolphins football team. The track will not use any public roads, and all the of the infrastructure being used is on Hard Rock’s property.

Dolphins’ principle owner Stephen Ross has worked with city officials and Formula 1 to organize and promote the event from the start. Despite the best efforts of local protesters, who said the Grand Prix would create noise pollution of up to 97 decibels within a 2.5-mile radius of the stadium, the race got the green light — eventually.

Initially, the proposal for a street race in Miami was introduced to Miami-Dade County officials in 2018, and the plan sought approval for it to transpire in 2019. Ultimately, development plans were delayed as F1 did not want to approve a “sub-optimal race track” and felt that improving the layout, which was tinkered with several dozen times, to create the best possible on-track product was a priority.

Plans to bring F1 to South Florida once again halted at the start of the COVID-19 pandemic in 2020. The racing league, just like every other professional sporting league around the world, had to adjust its schedule and travel protocols to ensure the health and safety of the individuals in the industry. F1 never came to North America in 2020.

“We’ve worked hard to create a track with great racing and a venue with unparalleled fan experiences,” Tom Garfinkel, the Miami Grand Prix’s Managing Partner, told F1.com. “There has been tremendous enthusiasm and anticipation for this event, and we’re happy to be able to announce the date so that people can start planning for it.”

When the New Mexico Motorsports Report covered the 2019 U.S. Grand Prix, we asked Carlos Sainz Jr. about the prospect of racing in the city. It hadn’t yet been made official.

“I would (have interest),” Sainz told NMMR. “I like Miami. I’ve been there before. I enjoy it, so I would be open to racing in Miami.”

Lewis Hamilton is a proponent of the Miami Grand Prix as well. He says the passionate fanbase of the city, which regularly follows the NBA and the NFL when racecars aren’t present, is crucial in making the event a success. And with American interest in F1 skyrocketing as a result of the popular “Drive to Survive” Netflix series the last few years, tickets to the inaugural event are comparable in price to that of a Super Bowl.

“America is naturally such a big place, and it always felt like we needed at least two races, if not more, there,” Hamilton said last fall. “When it comes on the calendar, it’s going to be a favorite spot for everyone.

The track will be 3.36 miles, run counterclockwise, and feature 19 turns. The start-finish line and pits will be along the northeast side of the stadium, and the race will be 57 laps.

Charles Leclerc has jumped out to an early lead in the championship. Ferrari has winning pace again, and the Italian squad’s greatest threat has been the Red Bull team. Mercedes haven’t had the speed that fans have been accustomed to over the last decade, but George Russell is second in the standings and looking to prove he can be as good as Hamilton, the seven-time world champion.

In an 11-year span, the U.S. went from hosting no F1 events to hosting two. And both Circuit of The Americas and the Miami Autodrome are as hot a ticket as anything in the country. For the 2021 U.S. race at COTA in Austin, Texas, the entire three-day weekend crowd was estimated at 400,000 spectators — a record attendance. Undoubtedly, the Miami venue will sell out, and admission will be in the thousands of dollars per person.

F1 has never been more popular in the country. So if you can’t make it to the race because of the price or distance from home, you can watch the 20 best drivers on the planet tackle the streets of Miami on Sunday, May 8, on ABC at 3:30 P.M. ET.