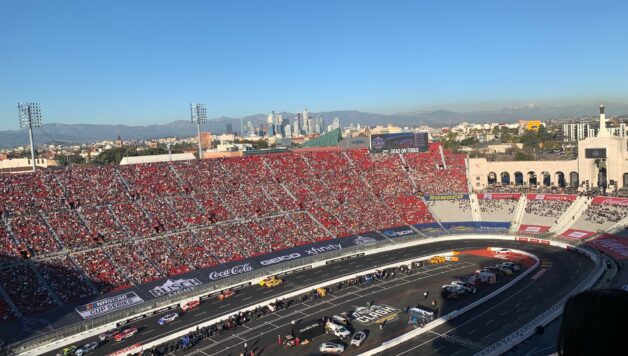 It was a process that began 18 months ago, and on Sunday, Ben Kennedy’s vision became a reality.

What if NASCAR ran its preseason exhibition race somewhere other than Daytona International Speedway? And what if it took place inside a football stadium instead?

Undoubtedly, a crazy idea. But it happened. And it worked.

The Clash has been a staple of the NASCAR calendar for decades. Its traditional use was to create buzz before the series’ grandest event, the Daytona 500, and give fans a teaser of what’s to come when the season begins.

It used to be a field consisting of pole winners from the year before. Typically, the grid was around 20 cars — about less than half of what the whole field would look like once the regular season began.

Over the years, the eligibility expanded to playoff drivers, former winners of the event, former Daytona 500 champions, and so forth. The race also became somewhat stale. Take the 2019 Clash, for example. It was a race that consisted of single-file racing and ended with Jimmie Johnson stealing the win away from Paul Menard after a pileup on the backstretch.

There were still 16 laps left in the race when the caution came out. But it never resumed because rain arrived, and thus, the event was called early.

For the 2021 running, NASCAR announced that the Clash would take place on the Daytona Road Course on a Tuesday night. It was an unprecedented move from the industry to race a weeknight and Daytona’s Rolex 24 configuration.

The ratings weren’t great as only 1.58 million people watched it on Fox Sports 1, and it was down almost 1 million viewers from the 2020 running. Some of the anticipation of having cars racing on the road course was erased since the Cup Series used the circuit in August 2020 after Watkins Glen International was removed from the schedule during the COVID-19 pandemic.

It was his idea to bring NASCAR to the Los Angeles Memorial Coliseum. The stadium will turn 100 years old in 2023. It’s an iconic sports venue in Southern California. It has hosted the Olympics, the Super Bowl, the World Series, several L.A.-based sports franchises, and most notably, the University of Southern California Trojans football team.

Never had racecars been in the stadium. But a quarter-mile paved track was built over the football field, and the new Clash featured heat races, last-chance qualifying, and a 150-lap main event. It also had two concerts on Sunday — a prerace performance by Pitbull and a halftime show by Ice Cube.

About 70 percent of the spectators were first-time NASCAR attendees. Daniel Suarez was happy to see a large number of Hispanic fans. With Bubba Wallace’s rise in popularity and Ice Cube putting on a concert, there were certainly going to be more Black fans in the Coliseum. And the stadium is located just south of USC’s campus — college students were attending the same stadium they watch their beloved Trojans, but now it’s been transformed into a racetrack.

It had the atmosphere of a Super Bowl and the racing of a Saturday night event. It was a perfect blend of quality racing with NASCAR’s Next Gen cars making their debut and buzz in one of America’s largest cities.

“I think an incredible day for the sport. Really proud of NASCAR, the industry, everyone coming together. … Teams and drivers coming together, rallying around this. Fox has just been tremendous with us, six hours on Fox today. I think this will be great as we look to kick off our season in two weeks for the Daytona 500,” Kennedy said after the race.

The television ratings rebounded. The race aired on Fox instead of FS1 for the first time since 2016, which certainly had some impact. But the viewership had a 168 percent increase over last year’s running. More than 4.28 million people tuned in for the race on TV.

NASCAR took a gamble. This could have easily been a disaster. The durability of the new cars was an unknown. What if the track took a long time to repair when someone hits the wall? What if it was just flat-out boring?

Thankfully, none of that happened. And going forward, this opens the possibility of NASCAR trying out other venues not just in the U.S. but around the world.

The possibilities are endless. NASCAR executives should pat themselves on the back for successfully creating a temporary track in a football stadium, reaching first-time watchers, and creating a buzz in one of the U.S.’ greatest markets.