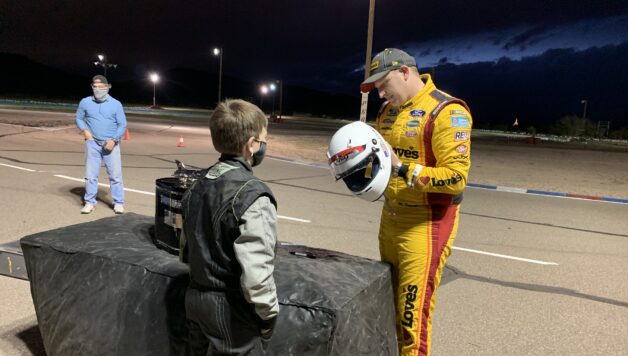 McDowell won the Daytona 500 last month for his first victory in NASCAR’s top level. His triumph marked the third time Front Row Motorsports has won in the NASCAR Cup Series, and the second time it will make the playoffs.

McDowell, who grew up in Glendale, Arizona, is making his highly-anticipated return to the Valley Area this weekend as NASCAR visits Phoenix Raceway for the Instacart 500.

The 36-year-old veteran has been racing professionally for more than a decade and a half, but NASCAR wasn’t always where he thought he’d end up.

McDowell grew up and honed his racing skills at the Phoenix Kart Racing Association track in north Glendale. As a child, he would ride his bike to the track from home and log laps throughout the week to improve his performance.

The New Mexico Motorsports Report spoke to McDowell, who spent time with young, aspiring racers and competed against them on Thursday night at the PKRA track.

When was the last time you were at this track?

McDowell: “Probably 2003 or ‘04. It’s been a while — 15 or 16 years. … I felt like right back at home. I spent so many days, years, laps, races here that it all came back really quickly, and it’s a cool opportunity. And to be here with these kids and share the dream. These kids are where I was when I was 8 years old, dreaming about being a racecar driver, so it is cool to see their enthusiasm and come hang out.”

The KPRA track is more reminiscent of the venues commonly seen in Europe for junior formula drivers. You made several open-wheel starts early in your career. How did the transition to stock cars happen?

McDowell: “I was never planning on the transition. It’s just how it happened. I came from karts, ran formula cars, ran the Road to Indy program and won the Star Mazda Championship, and was on that open-wheel path. Just with timing and the way that it worked, there was not a handful of opportunities. I ran a couple of races in Champ Car — back when Champ Car and the IRL were split, so neither series was really strong. I met with Chip Ganassi, and he said, ‘You’re young, you’re American, you should be racing in a stock car. I don’t know why you’re trying to get into an open-wheel car.’

“That’s kind of when I changed directions. So it was never really the intention or the plan. But I’m glad that I did it because I’ve had a long career and open-wheel is very tough to make it in. I’m glad to see that open-wheel is strong again, and there is the opportunity for young guys to come up. And then obviously with NASCAR, their feeder series gives kids the opportunity to move up.”

What has life been like since winning the Daytona 500 a month ago?

McDowell: “It’s been fun. It has been chaotic, and there has been a lot of interviews and not a lot of sleep, but it’s an awesome moment. It’s a huge achievement for my team, my family, and me. We’re taking it in and enjoying it. This week, in particular, has been really special just to come back home with friends and family. It’s been awesome.”

Have you thought about the enormous ovation you’ll receive during driver introductions on Sunday?

McDowell: “I wish we could have the full crowd there. It’d be awesome, but we’re not at full capacity yet. Phoenix Raceway is going to be special this weekend. It’s cool to carry the Arizona banner and be a local guy that won the [Daytona] 500. It’s pretty neat.”