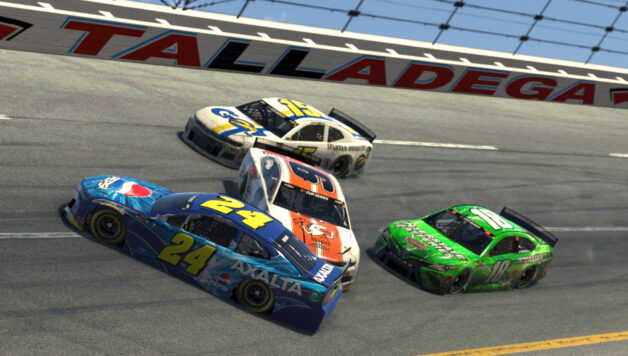 (Virtual) TALLADEGA, Ala. — Four-time NASCAR champion Jeff Gordon didn’t win the Geico 70 nor did he finish on the lead lap, but he still had the time of his life sitting in an iRacing rig on Sunday.

Gordon hasn’t been a full-time NASCAR driver since 2015, but he still seems as competitive as ever. On the last restart of the race, he said he was jealous of the drivers who got the chance to go for the win while he was out of contention.

Gordon was multitasking on Sunday afternoon — he was driving the No. 24 Pepsi Chevrolet with the scheme that he took to victory lane at Talladega Superspeedway in 2004, and he was commentating Fox Sports’ television broadcast.

Gordon was involved in one of Talladega’s notorious “Big Ones” on Lap 11, and it sent the No. 24 spiraling through the air.

Have you landed yet, @JeffGordonWeb?

The Big One strikes with a vengeance early at @TalladegaSuperS. pic.twitter.com/c3WGnVJK0P

Fortunately, drivers were equipped with one reset, so Gordon was able to resume racing. But he got caught in a wreck with Chase Elliott and Brennan Poole in the closing laps, too.

Altogether, three retired NASCAR stars competed on Sunday. Dale Earnhardt Jr. and Bobby Labonte were in the race, too, as they have been since the Pro Invitational Series began last month.

Jeff Gordon, Bobby Labonte, and Dale Jr. are all in a #NASCAR race today. What a time to be alive.

The last time these three drivers raced together was the NASCAR Cup Series race at Talladega in October 2015.