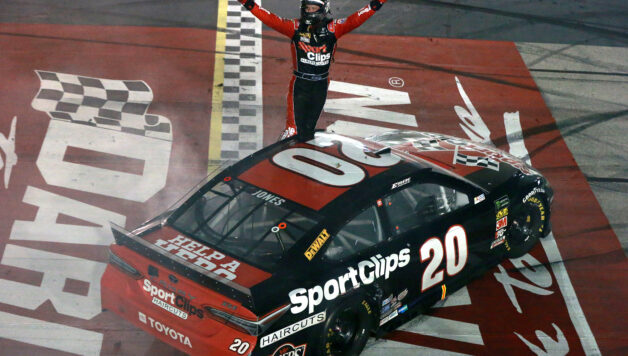 Erik Jones won the rain-delayed Southern 500 at Darlington Raceway on Sunday night. It was his second career win in his 100th career NASCAR Cup Series start.

The victory moves him up to ninth in the playoff grid and he joins his three Joe Gibbs Racing teammates in having at least one win in 2019. Kyle Busch, Denny Hamlin, and Martin Truex Jr. have four apiece.

Fourteen drivers have clinched postseason berths with one regular-season race remaining at Indianapolis Motor Speedway next weekend. Vying for the two final positions will be Clint Bowyer, Ryan Newman, Daniel Suarez, and Jimmie Johnson, who has never missed a chance at competing for a title since the Chase’s inception in 2004.

JGR has won 13 of 25 races this season. It seems plausible that it could break Hendrick Motorsports’ record of winning 18 of 26 races, which occurred in 2007.

It was Denny Hamlin who crossed the finish line first on Saturday at Darlington, but Cole Custer was declared the winner after Hamlin’s car failed post-race inspection.

For Custer, it was the sixth win of the year. He is tied with Christopher Bell for the most in the series. Tyler Reddick finished second and maintains the lead in the points standings. Two races remain before this series’ postseason begins.

The race started with a multi-car pileup caused by Graham Rahal. Rahal tried to gain positions as drivers in front of him braked into Turn 1, and he overdrove it. He hit Zach Veach and Conor Daly and James Hinchcliffe were collected.

Rahal took the blame for the incident.

I’m disappointed in myself for the first corner incident, and sorry to those who’s races it affected. The last 2 years have been certainly “trying” and that came to a head today. Contrary to every twitter troll on the planets claims, I certainly never intend to do that.

Ryan Hunter-Reay admitted fault as well when he blocked Rossi in a battle on Lap 14 and wrecked with Jack Harvey.

I feel absolutely terrible for the mistake I made today. Entirely my doing 120% no excuses, no explanations. I’m very sorry @jack_harvey42 & his team were victims in this in what was a promising weekend for them. Apologies to my team & partners. Feel terrible

Josef Newgarden holds a 41-point lead over Rossi with only Laguna Seca remaining on the schedule. Simon Pagenaud is in the hunt as well, just one point behind Rossi.

It was a somber weekend at the Circuit de Spa Francorchamps as 22-year-old Formula 2 driver Anthoine Hubert died in a horrifying crash on Saturday. The Formula 1 community mourned his loss before the Belgian Grand Prix and fans gave a standing ovation tribute on Lap 19 (Hubert’s car number).

His victory was Ferrari’s first of 2019. The next round will take place at Monza, where Ferrari is expected to be a favorite again. Championship leader Lewis Hamilton finished P2 and has a 65-point lead over Mercedes teammate Valtteri Bottas.

The FIA World Endurance Championship’s new season began at Silverstone on Sunday with a four-hour event.

Toyota continued its domination of the LMP1 class with a 1-2 finish. Mike Conway, Kamui Kobayashi, and Jose Maria Lopez were the winning drivers. Rebellion Racing rounded out the podium.

Cool Racing with Nicolas Lapierre and Antonin Borga won the LMP2 class. The Porsches finished 1-2 in the LMGTE Pro class and the AF Corse Ferrari won the GTE Am class.