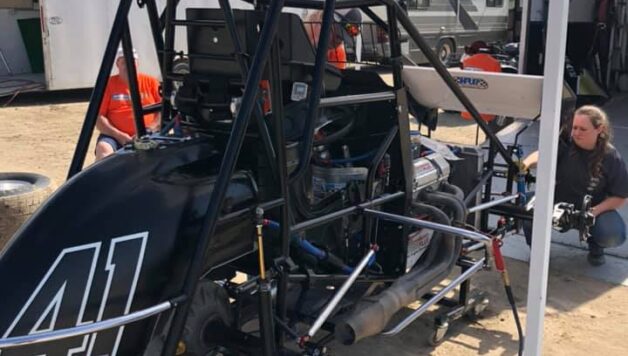 BACK ON TRACK: Dillon Tanner Partners with Hal Burns Racing for Series Return

Previously, Tanner and his CDI Motorsports team, co-owned by wife Skye Tanner, announced that they would end their season early to put a better focus on the 2022 season with a new chassis on the way.

Those plans would change this week as Tanner got the call to race for David Burns and Hal Burns Racing behind the wheel of the NAPA Belts & Hoses No. 41 J&J Auto Racing entry for a special event celebrating the life of Truman West, Tanner’s former car owner and grandfather-in-law.

“To me, it’s more about the excitement of being a part of such an important race for my family,” explained Tanner. “Whether it is the last race of the season for us or not, it’s just cool to be a part of. Combining CDI Motorsports with Hal Burns Racing should be fun. We all get along great and to learn, grow, and have fun together is what racing is all about for both teams. It’s a match up that has been trying to happen for quite some time and it’s definitely fitting we finally come together for Truman.”

As drivers prepare for this weekend, they are reminded that there are just three points events remaining on the 2021 schedule before we crown another champion. Action for the Truman West Memorial Race kicks off at 6:00PM on Saturday, August 28th at Sandia Speedway with the Lucas Oil POWRi NMMRA Sprint Car Series, Micro Sprints, A-Mods, Stock Cars, and Cruisers.